Traditional Holiday Drinks Around The World 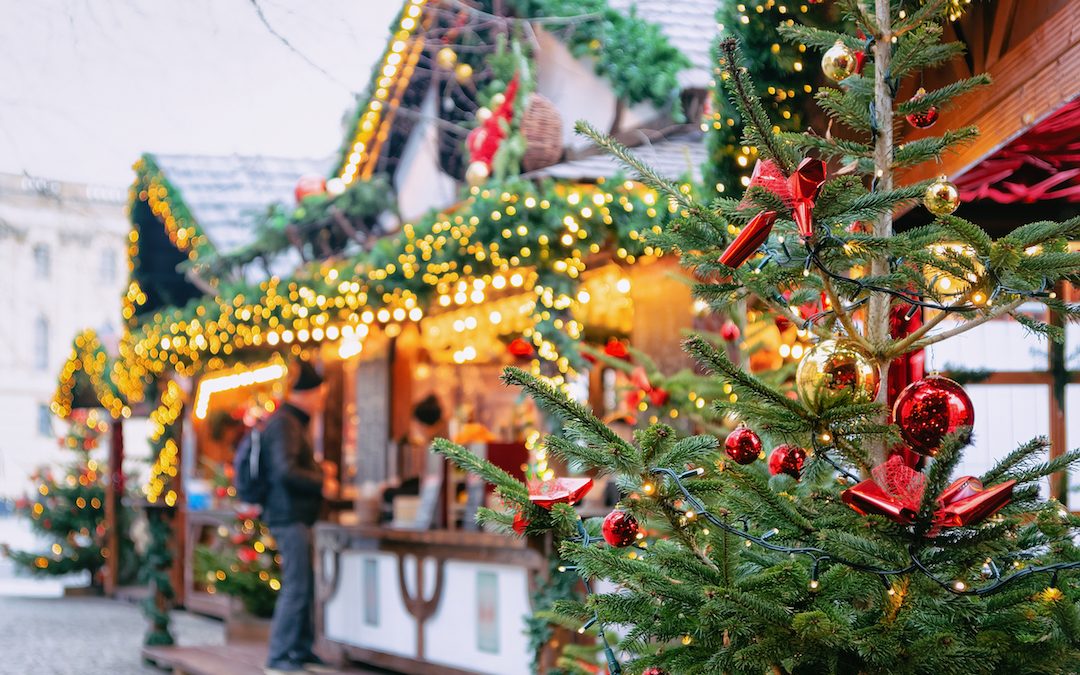 We love to explore the crafty wonders of the world and what better time to do that than the holidays? We’re exploring holiday traditions around the world…through booze, of course!

Let’s jump into these delicious and traditional Christmas drinks that are enjoyed around the globe. So, if you are looking for inspiration for a themed part with holiday drink or simply want a cultural experience without leaving the comfort of your couch, allow these to take you on a world tour. Like armchair travel just with booze, each is produced with a crafty dram specific to that region. 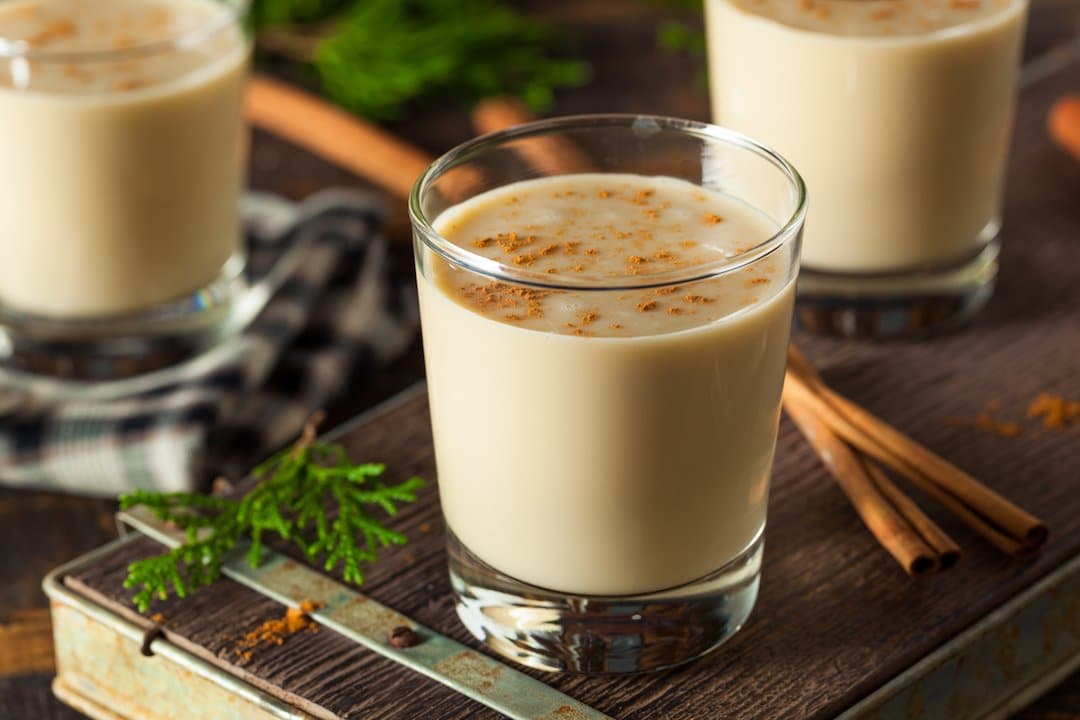 Mexico is more than churros and Tequila. While we certainly love a great craft tequila, Rompope is the drink most consumed during the festive season in Mexico.

This drink was originally brewed by the nuns of Santa Clara Convent. Although the nuns never tasted a drop, it eventually became so popular that they sold it as a means of income. While we are sure one of the sisters took a sneaky sip at least once, finding written proof of that has proved challenging.

Rompope is made from nuts such as almonds, sugar, milk, cinnamon sticks, vanilla, egg yolks, and Mezcal.

Mezcal has been produced the same way for over 300 years, recipe passed down from father to son to become a truly artisanal craft spirit. You can read more about in our article Magical, Misunderstood Mezcal.

Rompope is served in small glasses because of its strong sweet flavor and is especially enjoyed around Christmas time. There are a few commercially bottled brands available, but the home-brewed version is most popular. 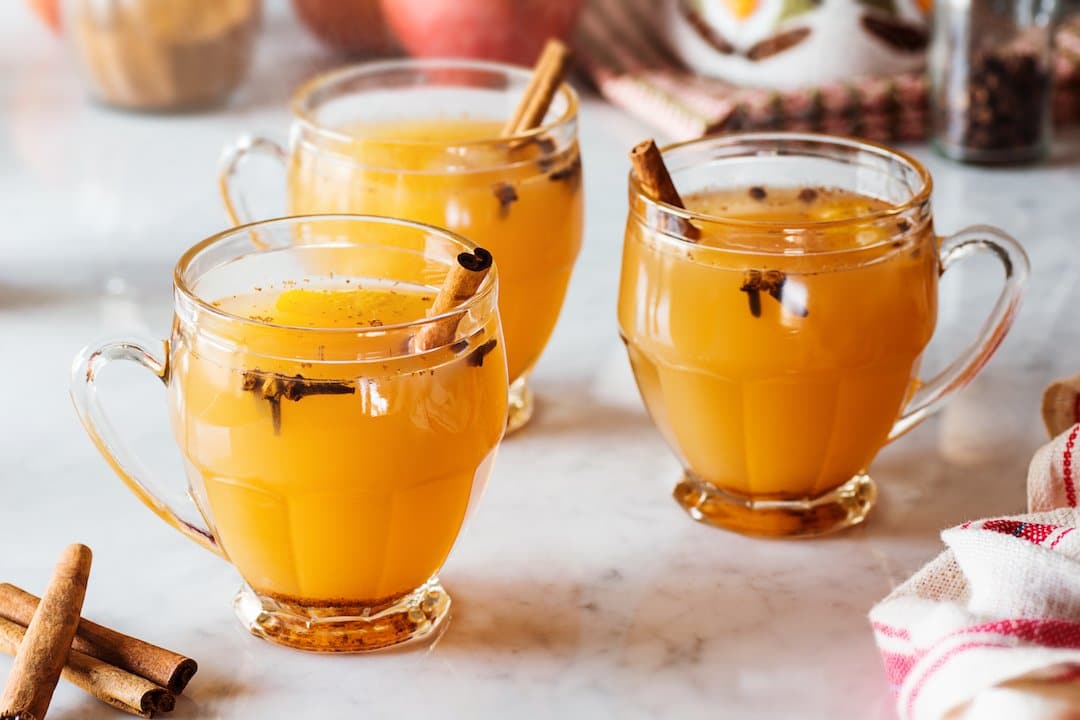 The origin of Wassail has many variations each interesting, with its own appeal much like the family recipes for this festive punch. This British holiday drink is made with either warm ale or cider and fruit and spices to add to its flavor.

The legends of Wassail include a tale of a sexy Saxon maiden who used a bowl of Wassail to trick, bed and wed a King. A pagan ritual involving singing to the fruit trees to ensure a good fruit harvest for cider production. And lastly, visiting door to door to sing and offer sips from the wassail bowl in exchange for gifts. This is where it is believed modern-day caroling originated.

This recipe calls for a good cider to use alongside the beer as a base, so why not choose one of our favorites? Herbs and spices such as nutmeg, ginger, and cardamom; sugar, lemon, water, and apples. These are added to the cider and warmed on the stove. A drop of brandy makes a warming addition If you need some extra courage ahead of the caroling. 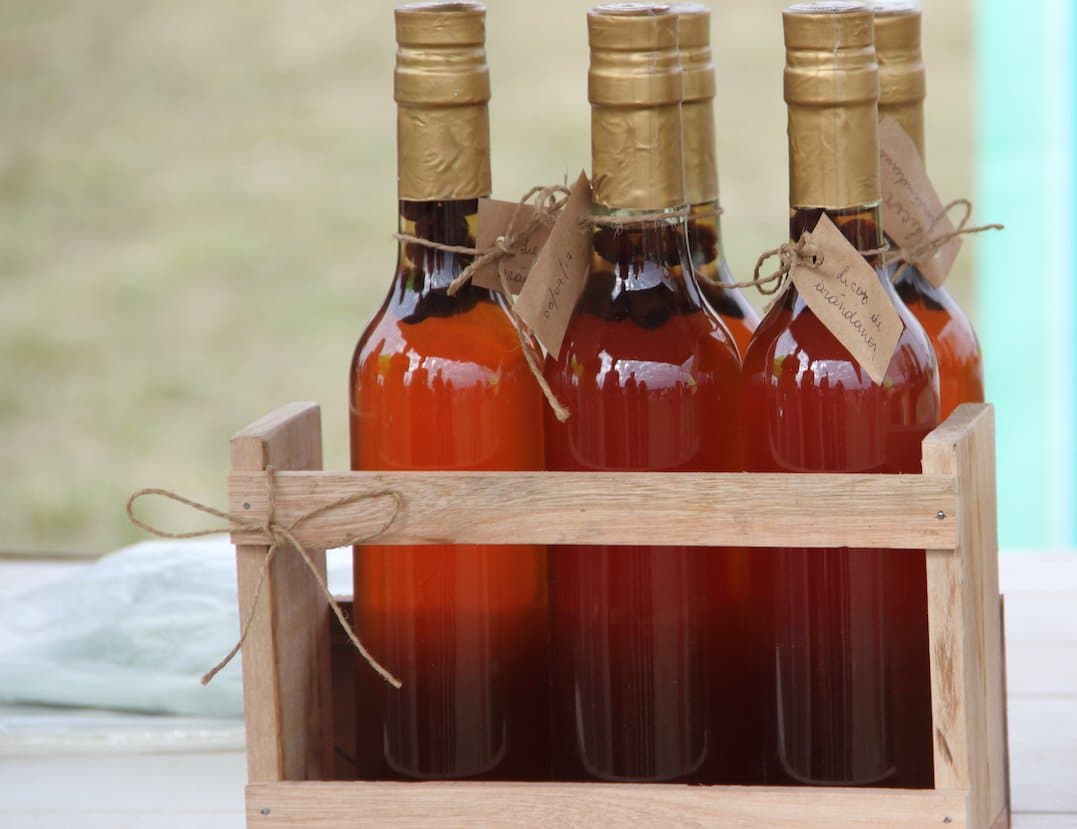 Krupnikas is a holiday drink and honey liquor made from grain alcohol, citrus, spices, water, and honey. The Spices often included in the blend are cinnamon, vanilla pods, ginger, cloves, and allspice.

Lithuanians believed that it warded off colds, darkness and evil spirits and the recipes for this delicious drink are jealously guarded secrets. A traditional Christmas drink that tastes delish and wards off evil spirits? Count us in! Krupnikas was first produced by Benedictine monks in the early 1500’s. It quickly became a favorite among the nobility, but production was shut down by the Soviets for many years. Recipes were saved by family elders during this time and passed down generation to generation. Interested in making it yourself? Check out this recipe here

This craft holiday drink has once again become popular and numerous artisanal producers are bottling small batches. The best way to enjoy it is warm out of the pot, while gathered around the stove with friends and family. 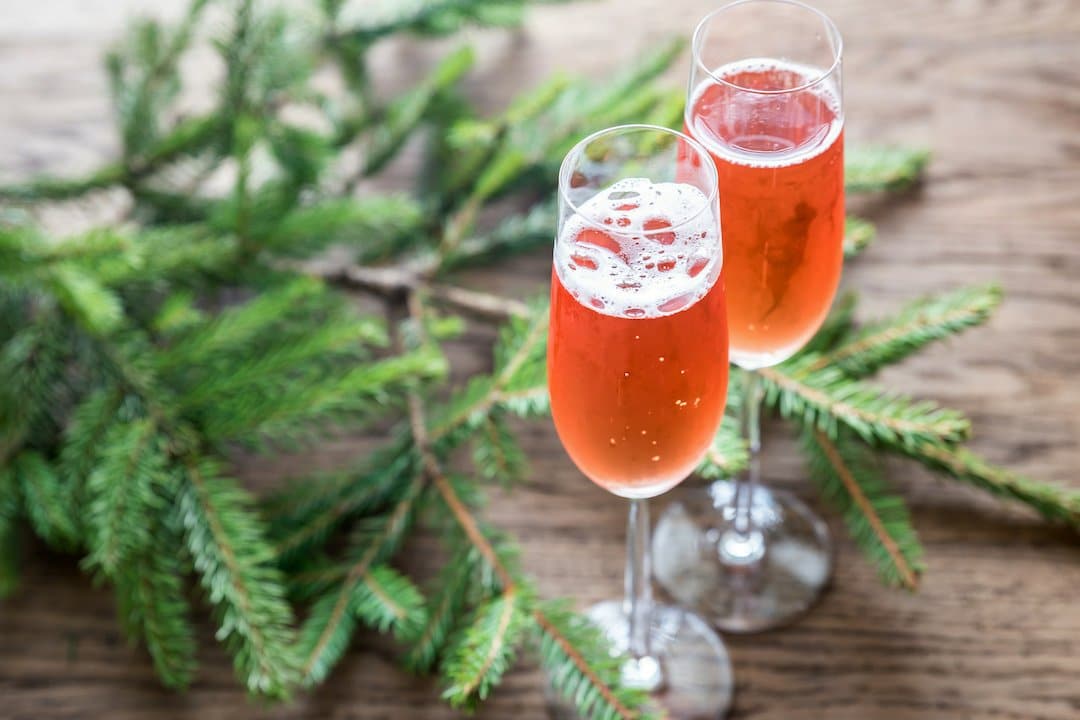 The French are known for their fantastic Champagnes, but the Kir Royale really gets the attention in French homes as one of the favorite holiday drinks the festive season.

The Kir Royale is a blend of Crème de Cassis, a blackcurrant liquor, and dry champagne (good sparkling wine will do if you can’t find or don’t want to splurge on the really good stuff).

The secret to a great Kir Royale is to use a dry Aligoté based bubbly and allow the Crème de Cassis to add an ever so slight sweetness to the cocktail. A true connoisseur knows how to pour a perfect Kir Royale by color alone. Aim for a blush-hued flute of deliciousness by first adding the Crème de Cassis and then bubbly so it mixes properly. Or aim for the tried and true 3 parts bubbly to 1 part Crème de Cassis.

While Aligoté bubbly isn’t always easy to find, a Blanc de Blanc will do in a pinch. And, of course, break out the festive glassware for this one! 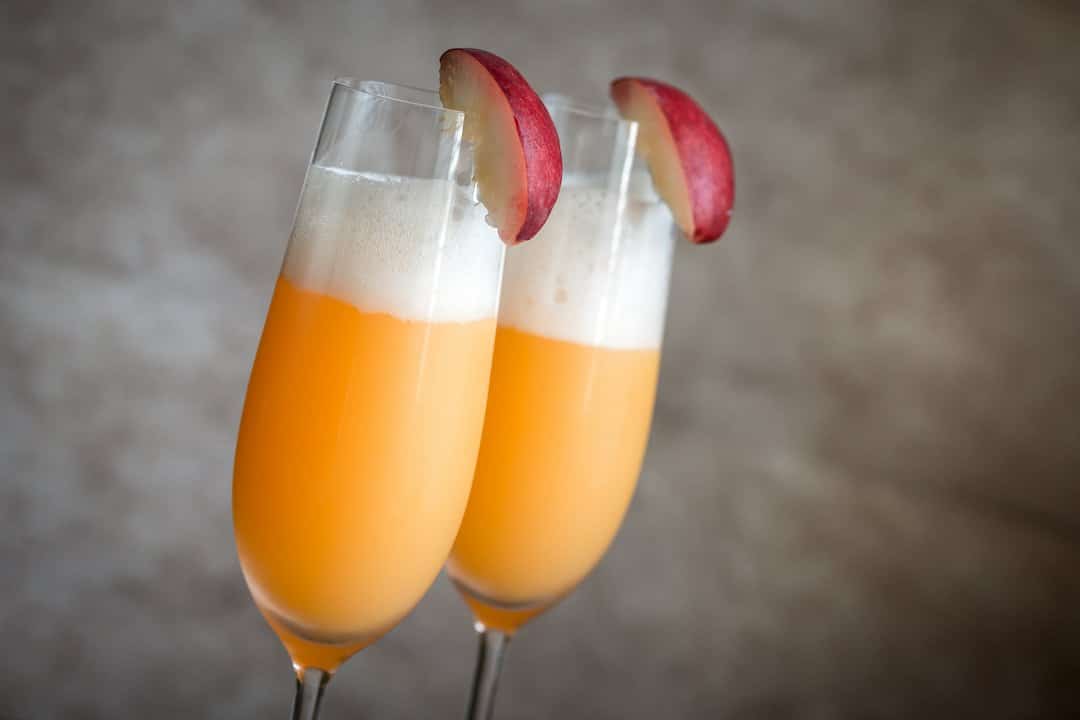 The true Bellini originated in Venice, Italy and was poured for the first time in the 1930’s. There are many variations today made with peach schnapps or juice. But, a true Bellini, named after artist Giovanni Bellini, must be made with Italian white peach puree and Prosecco.

The peach puree is spooned into chilled flute glasses, topped with Prosecco and stirred ever so lightly to blend. Prosecco is an Italian sparkling wine of origin which is produced mainly from the Glera grape. This cultivar is known for its neutral flavors and the unusual characteristic of tasting slightly sweet even though it is produced dry. This is due to its faint apple, melon and honeysuckle notes.

The proportions for this holiday drink (although honestly I prefer this to mimosas year round for a brunch treat!) are a bit different than the French Kir Royale. Here you want 2 parts Prosecco to 1 part peach puree. If you want to get extra fancy throw in a fresh raspberry or two for a visual treat.

Coquito is a traditional Christmas drink which directly translates to ‘little coconut’. Often referred to as coconut eggnog because of its similar creamy texture and association with classic holiday drinks, like Mexico’s Rompope.

A blend of coconut milk, coconut cream, condensed milk, and the star – Puerto Rican rum. Puerto Rican Rum has been produced for centuries and today rum production is governed by some strict quality regulations.

Think rum is just for fruity or creamy mixed drinks? Or rum and cokes? Sounds like you need a little refresher on the beauty and versatility of rum!

Each household has its own variation of Coquito with sweetness and strength adjusted to taste. Here’s a good recipe with a cute idea of also giving this as a holiday gift. 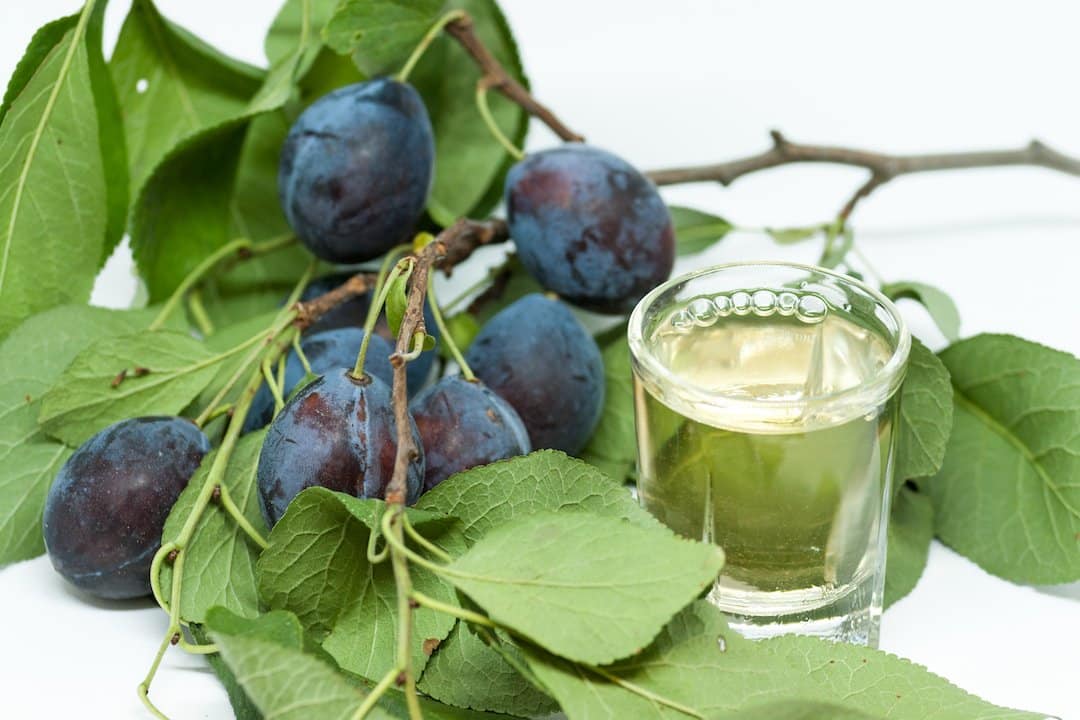 This potent spirit is distilled from plums and made in kitchens and backyard stills across Romania. It is served as a shot at every celebration and always makes numerous appearances during the holiday season as a classic holiday drink.

This fruit brandy is said to aid digestion and stimulate appetites, so is often consumed on an empty stomach before a big meal. ţuica’s proof is as high as 60% ABV, so a shot or two will warm you from the inside out. While we unfortunately aren’t about to suggest home distilling to anyone this is a fun one to keep an eye out for when traveling or in culturally similar restaurants.

What Traditional Holiday Drinks Do You Enjoy?

If you find yourself in one of these destinations don’t miss out on these traditional celebratory drinks from local artisanal producers. Or better yet use one of the recipes provided to bring a sense of travel home this holiday season.

Remember, the most important part of the holidays is sharing with those you love, especially your boozy discoveries. So, if you happen to sip something delicious and traditional this holiday season – we would love to hear about it. Or if you have a favorite traditional Christmas drink or holiday drink that we missed we’d love to hear about it! And, if you find yourself with a bit of time to spare in your armchair for a good read, why not travel through history with A History of the World in 6 Glasses? We guarantee you’ll have a fantastic trip.

Be jolly and safe! And if you find yourself recovering a bit from all of the holiday drinks season of fun on New Year’s Day, we’ll have you covered with a few of our favorite Bloody Mary recipes waiting for you.