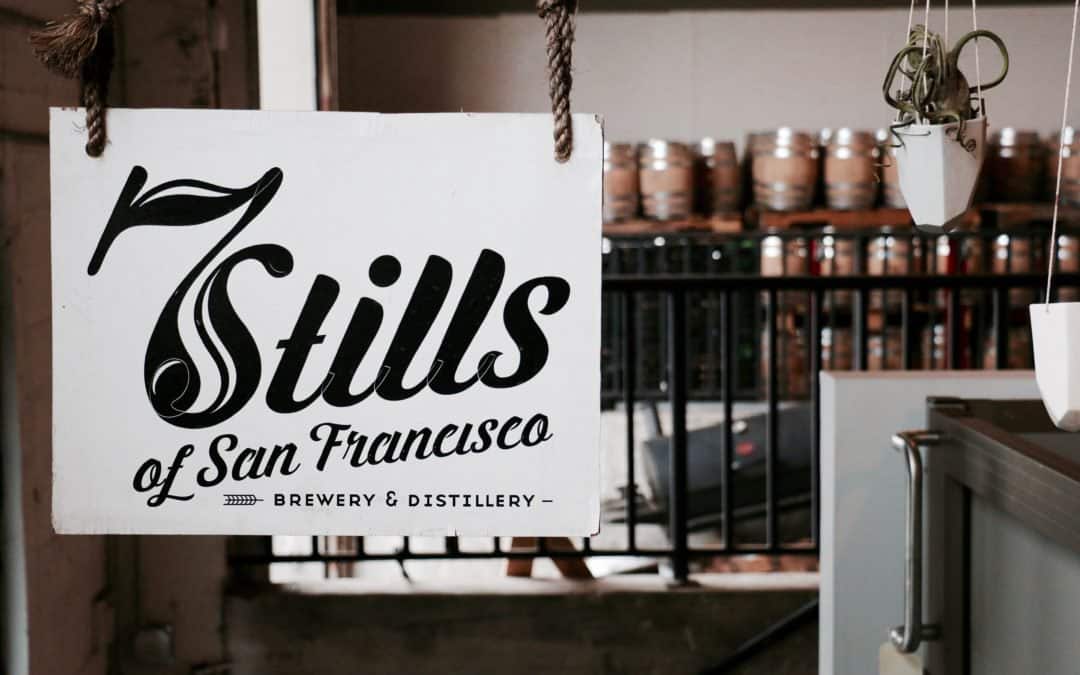 Whiskey. Just the idea of it lends to feelings of sophistication, perhaps in a silk robe beside a roaring fire. But what sets silk robe flavor apart from sweatpants swill? The answer is in the craft. With Seven Stills Whiskey, they ensure quality over quantity when it comes to spirits. So much so that they aren’t just making whiskey like everyone else in craft distilling..they’re taking it a step further. They’re making craft whiskey out of craft beer. I mean high-quality craft beer that is good enough to drink…not just a stepping stone and “technically” a beer on it’s way to growing up and becoming a whiskey.

But let’s first take a little step back and introduce you to Seven Stills Distillery and Brewery of San Francisco , which is the brainchild of COOs Tim Obert and Clint Potter. The two decided to put their aspirations into the business with one goal in mind: making outstanding flavor, with some unique San Francisco flair and without compromising integrity. After a tour, tasting and some quality time with Tim himself, The Crafty Cask is definitely a fan.

Located in the Bayview district, the city outskirts locale makes this place a hidden gem to those less familiar with San Francisco. Upon entering, the first thing to note is the unpretentious feel and attention to the thirsty, curious customer. Beautiful table tops and a bar for tastings, a game of cornhole off to the side and even a couple of bench swings – ideal for post-tasting antics. This isn’t your normal quick stop tasting room. This is somewhere you want to hang out for a while. If you’re lucky you’ll get a warm hello from Tim’s pup and the welcoming staff…many of whom may be brewing beer or distilling whiskey right there while you sip. Speaking of sipping, let’s get to the actual whiskey!

What we really want to focus on here is one essential fact that sets Seven Stills apart from many of their craft whiskey peers: creating a drinkable and delicious craft beer as a starting point. Seven Stills first begins with raw, locally sourced ingredients. This means using high-quality specialty malts and yeasts to develop the flavors that make a beer drinkable before distillation even begins. So drinkable, in fact,that while they started as just a distillery they’re now selling their brews direct to consumers as well! Once a brew is produced it’s off to the still for distillation (for a whiskey distillation 101 refresher click here).

Go big or go home, a saying that doesn’t have much weight around Seven Stills. In fact, they go small even when it comes to barrel aging and there’s a good reason. Most of the time whiskey is made in large, 52-gallon barrels. Seven Stills chooses adorable little 5-gallon barrels but it has nothing to do with cute aesthetics. The small barrel creates a higher wood surface area-to-whiskey ratio. Basically, the wood and whiskey interact much more closely leading to deeper flavor in less time. Minus the science and cutting to brass tax here – the whiskey is made better and you can tell on the very first sip.

The Seven Hills of Seven Stills

Seven Stills, by nature, is a collaborator. And their greatest collaboration of all is the one involving the entire city of San Francisco. The name of their distillery is a play on the Seven Hills of San Francisco – Telegraph Hill, Nob Hill, Russian Hill, Rincon Hill, Twin Peaks, Mount Davidson, Lone Mountain and Mount Sutro. For their Core Whiskey Series (ones they always have), they’ve embarked on a seven-year plan to introduce a whiskey for each of these seven hills. Right now they’ve got the following three:

Czar refers to SF’s Russian Hill. This whiskey is deep and sultry with a come-hither attitude to savor. Their recipe begins with Seven Hills distilling their Russian Imperial Stout twice with the second distillation passing through their gin basket filled with California hops. In the end, this whiskey has the beautiful bite of a well-crafted “sip on a cold evening” whiskey.

Chocasmoke is a more savory whiskey made from their own chocolate oatmeal stout with peat smoked malted barley. The result is a dangerously delicious flavor that finishes with a hint of smoke. Chocasmoke is inspired by the Twin Peaks hill. Early Spanish settlers once called the peak “los pechos de la choca” which means Breasts of the Indian Maiden (due to the hill’s two adjacent peaks).

Fluxuate is derived from the prestigious likeness of Rincon Hill, San Francisco’s gold rush haven. During the rush, JA Folger also began what is now Folger’s Coffee. The whiskey is distilled from their coffee porter brewed with Flux cold brew coffee. The result is a smooth pour that showcases a slick vanilla introduction and finishes with aromatic, dark flavors.

As we mentioned, Seven Stills loves to collaborate and one of the unique ways they do this is to work with other breweries/distilleries to create experimental and collaboration whiskeys. So what does that mean exactly? Well – it means that Seven Stills finds craft beers that they love and make some amazing craft whiskey out of it!

If you like the idea of craft producers collaborating as much as we do, your admiration may deepen with this gem; Seven Stills also works with local/featured street artists, like Cannon Dill and Zio Ziegler, to create each and every bottle design to depict the story behind and character of each whiskey.
 Time to get Sipping…on Seven Stills Whiskey

Whiskey is the star at Seven Stills but we highly encourage any avid sippers, to go get yourself a taste of the good life and try all the craft beverages they have to offer. Especially now that they’re serving up their own craft brewed beers as well. Head on over to their website for locations and details about their Founders Club, which will let you purchase their whiskeys online (yay!).

Have you tried Seven Stills? If so we want to hear from you! While at first glance some hard-core whiskey enthusiasts may get the impression that this whiskey is a bit kitschy (chocolate oatmeal stout whiskey?!) we are here to help change that perception. Seven Stills is making elevated whiskeys starting from an even higher quality starting point with more complex flavor profiles than most. If you agree or have questions let us know in the comments below…

Looking for more unique craft producer stories to be introduced to new favorites? Check out some recent producer profiles here for sweet potato liqueur, British-style ciders and more! Are you a producer with a unique product or story, drop us a line or take a look at ways to collaborate with us.