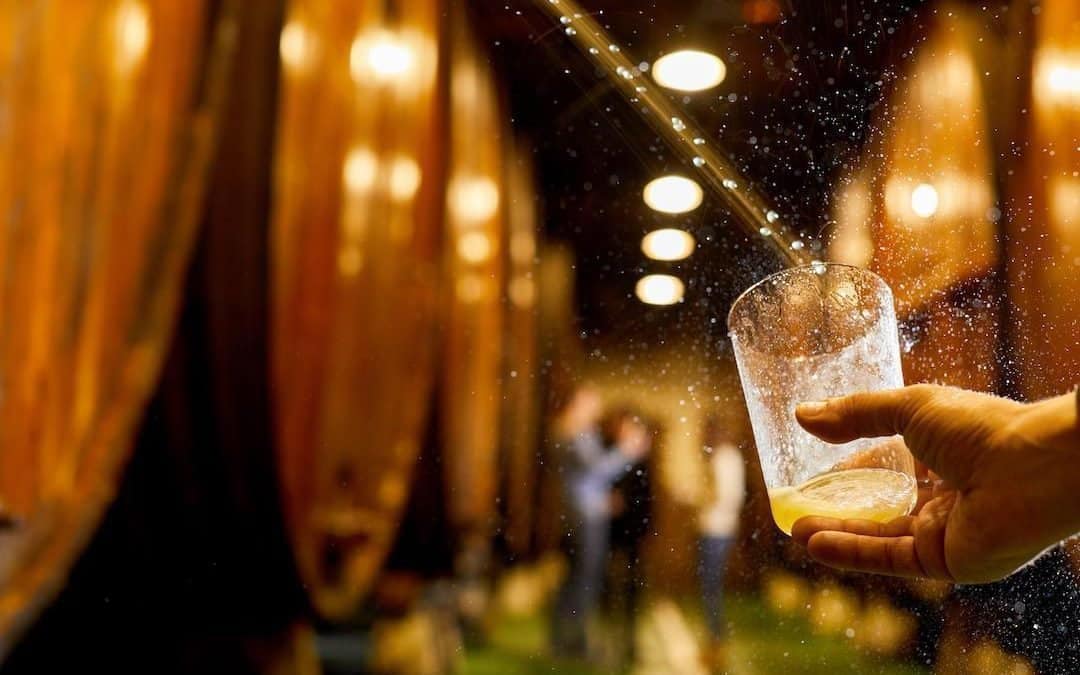 Those of you who have been following our ongoing cider series know that I fell hard for this wonderful fermented apple drink back in San Sebastían, Spain in 2001. It’s been a roller-coaster romance of deliciousness since that very first sip of Basque cider. I feel fortunate that my introduction to cider just happened to be at an amazing cider house (Sagardotegi, if you will) brimming with rich tradition and culture. What a first experience!

For the past almost twenty years now, I’ve held Basque cider up as my own holy grail. The best of the best. The O.G. The real deal. Recently, I returned to Spain for the first time since that transformational experience and got to dive back into my first cider love with new perspective, experience, and understanding.

The Basque History of Cider

There are many who say – particularly Asturian cider enthusiasts – that the history of cider in the Basque country is young, superficial, and more about tourism than a real part of the culture. While in comparison to the deep and pervasive Asturian cider culture this may be true, on a whole, it is not.

Cider has been produced in Basque country for centuries. San Sebastián, in particular, has always been a hot spot for cider production and drinking due to its old shipping history. When boats would depart from the port of San Sebastián, they would be piled high with enough cider for each sailor to drink up to 3 liters per day. Why? Because potable drinking water for long-haul journeys was virtually non-existent back then. So cider was not only more delicious, but also much safer for the sailors to drink while at sea.

This means there was high demand for cider in San Sebastián, so lots was produced and lots was consumed by the locals who lived there as well, both in celebration with the sailors when they returned and while they were away at sea. The families who ran the cider houses would invite friends, family, and guests over to drink and buy their cider. That tradition is hundreds of years old.

The tradition that is newer is cider houses offering full communal meals while pouring cider straight from the barrels. But how this came about is pure entrepreneurship. You see, the guests who used to come and pay to drink cider started bringing their own food to eat while they drank. And the cider making families noticed that the more they ate, the more they drank. Which means they bought more cider. So they decided to start providing traditional food as part of the experience guests were paying for as well.

Many of you may be familiar with the Basque town of San Sebastián. And if you aren’t, you should be (not only for cider but for incredible food experiences and beaches too!). San Sebastián is considered the cider capital of the Basque region. It’s where I studied abroad for 6 months and where my memorable ‘first sip’ took place. There are, however, a number of sleepy cider producing towns each with their own unique attractions and within a short drive or taxi ride from San Sebastian. So, should you find yourself on a Basque Country trip, which we strongly encourage between the months of January and April for prime cider sipping, do not limit yourself to this single town no matter how hard it is to pull yourself away.

So, why do we recommend January to April? Every year the cider season opens in mid-January and runs to the end of April. This is when the sagardotegis, or Basque cider houses, open their cellars so that the new vintage can be tasted. There are a few open year round, but visiting in the height of cider season is an unforgettable affair. Between the delicious menu of food, cider, and cider-catching fun, it really is an amazing experience.

Cider catching fun, you ask? What on earth does that mean?! Just like Asturian sidra is ‘thrown,’ Basque cider is ‘caught’ as it sprays out of enormous barrels in traditional sagardotegi. So first, you’re waiting for someone to yell out “Txotx”! Once you hear that, you know at least one barrel has been opened and is happily spraying cider out of its spout for you to enjoy.

Once that happens, thirsty guests line up in between bites of traditional food enjoyed in a communal setting to get their next sip of cider straight from the barrel. Glass in hand, they wait their turn in front of different barrels to catch the Basque cider as it sprays out.

The trick to not wasting too much (you don’t want to be that person!) by letting it hit the floor instead of landing in your glass is to cozy up to the person in line in front of you and hold your glass just below theirs as they catch their cider. When they step away after catching roughly two-fingers worth of cider themselves, you raise your glass and catch your cider. While doing this it’s important to keep your glass at an angle so the stream of cider hits the inner side of the glass (vs. aiming for the center/bottom of your glass). This ‘breaks’ the cider to release volatile acids and give it a slight effervescence, both of which enhances the flavor.

You might wonder…so how do you drink cider outside of a sagardotegi if “breaking” the cider as it shoots into your glass is so important? Essentially, you use the Asturian throwing approach, although the Basques only hold the bottle about 6 inches above the glass vs the roughly three foot distance that is traditional in Asturias. So don’t worry…you can certainly enjoy Basque cider at bars, restaurants, and at home.

Now that you know where it comes from and how to catch it, what does it taste like? I believe my very first description was along the lines of ‘dry with a cheesy funk.’ If that sounds appealing to you (I truly meant it as a huge compliment!) then it’s time to get your hands on some Basque style cider. There is essentially no sweetness at all, it’s dry, crisp, refreshing and often does have some cheesy or barnyard-y funk going on, which personally I love. If you enjoy sour beers, orange wines, or kombucha at all, Basque cider (and Asturian for that matter) will be right in your wheelhouse.

Some Basque cider fans have even described drinking the tipple without the food as down right wrong. Only when paired with traditional dishes, they claim, does it really shine. The traditional meals include rare steak, salt cod omelettes, roasted cod and peppers, roasted walnuts, quince jelly and Basque cheeses. You can check out the food and full Basque cider house experience in this video from my recent trip.

Time to Get Drinking Basque Cider

Luckily for us Tippler Nation, Spanish cider makers have started seeing the opportunity in the American market given the craft cider revolution we are undertaking ourselves. The American cider consumer who only wants sickly sweet ciders is no longer as pervasive as 10 or even 5 years ago, opening up an opportunity for Spanish cider imports. Which means, if you’re paying attention, you can find Basque ciders in restaurants, bars, and bottle shops. In Spain, cider is seriously consumed (and priced!) like water…which means it’s almost a commodity. One cider brand is generally considered to be as good as the next, which means creating brand loyalty is tough outside of diehard Spaniards who can pick up nuanced differences. The good news for you, is that this means you can be confident in almost any Basque cider you find here in the U.S.

So keep an eye out! Try some Basque ciders. Grab some proper Spanish cider glassware and a pour spout to keep the mess to a minimum at home until you perfect your pouring technique. And then make sure to leave us a comment below or tag us in any pictures to let us know what you find and what you think. And if you’re having a hard time finding any, here are five ways to get your Spanish sidra fix in the US to hold you over.

This post contains affiliate links to products. We may receive a commission for purchases made through these links, which helps fund The Crafty Cask. There is no additional cost to you.