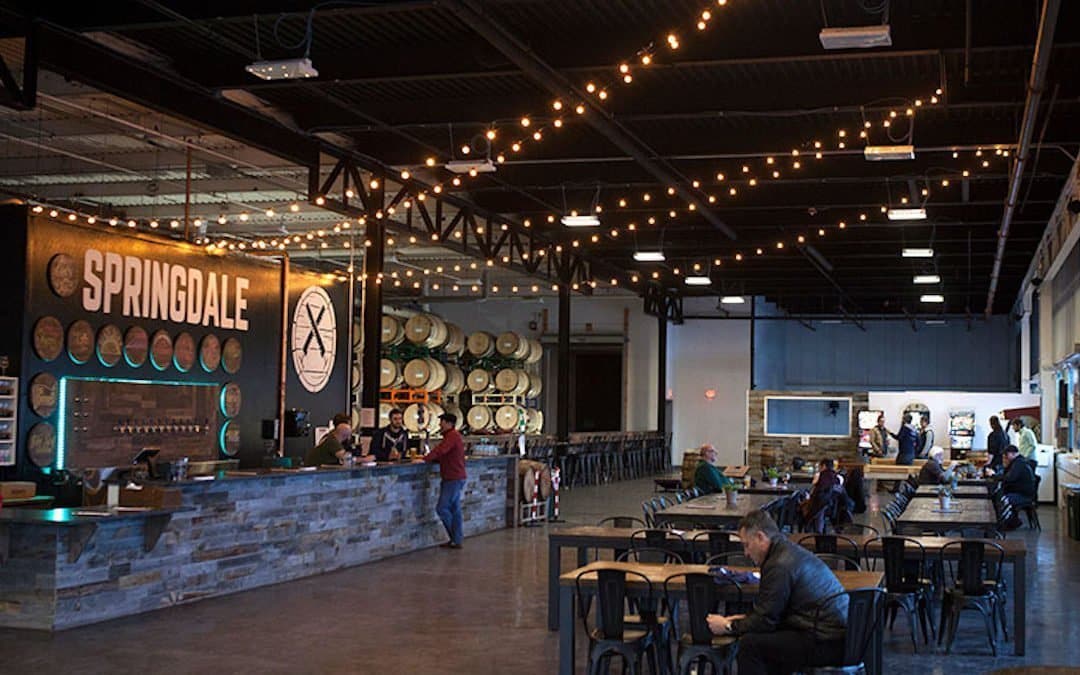 Do you like video games?  How about craft beer? Spending your day playing games and drinking a variety of incredible beers? Springdale Brewery Barrel Room in Framingham, Massachusetts is the place for you.

Springdale is the sister brewery of Jack’s Abby Brewing, which is right next door.  In 2016, Jack’s Abby wanted to create a site where brewers could experiment with barrel-aging and wild fermentation.  This brother-sister brewery duo is incestuous in the best way possible: the brewers work at both Jack’s Abby and Springdale.  However, if you are looking for a lager, Jack’s Abby is your place, whereas ales, IPAs, and sours are Springdale’s specialty. At Springdale the brewers get the opportunity to play with new and wild yeast cultures, try their hand at different barrel blends and otherwise express their creative passion for beer. Sounds like a grown-up fun house…but then, of course, the important question. How is all that fun turning out? With all this talk of beer, we should probably get into it!

Springdale’s focus is on ales, IPAs, wild and barrel-aged beers.  Brigadeiro breakfast stout features luscious coffee and chocolate overtones. A fabulous breakfast in my humble opinion.  Their IPAs are incredibly hoppy but complex because brewers often mix American and Australian hops in their libations.  And these IPAs are fun.  The Cobi Colada IPA is a liquid vacation because of its pineapple and coconut flavor.  We also recommend the Just Sayin’ IPA if you like a citrus, piney, West Coast-inspired beer.  It’s a hop explosion in your mouth… just sayin’.

But what gets The Crafty Cask team excited is Springdale’s impressive wild and sour beer portfolio.  For those who want to learn more about sour beer, check out our many previous articles on sour...we admit it, we’re a little obsessed.  Springdale’s Nectarine Berliner Weisse sour is a Berliner Weisse style beer fermented and aged with local white nectarines. Then there’s No Fuzz, which is similarly aged on white nectarines as a golden sour.  If you want to relive your high school days of a more tart and complex Fuzzy Navel, these would be your jam.  If nectarines aren’t your thing, the Fresh Boysen is an incredibly tart, sour larger beer made with Boysenberries and aged in red wine barrels for a year.  For every bottle, you are drinking ¼ pound of boysenberries. But Springdale offers lots of varieties of sours that appeal to anyone’s fancy, such as apricots (Apriculture), raspberries (Poive Raz), and cherries (Kriek Mythology) just to name a few. Talk about a fun way to meet your daily fruit and veggie goals!

Why so many varieties and creative combinations?  Springdale’s philosophy is all about experimentation and being expressive, both as a brewer and a drinker.  Their general manager, Joe Connolly, describes its beers as encouraging people to try new styles and flavor profiles.  Sours aren’t made simply because they’re trendy or it would be amusing to make a drinker’s mouth pucker.  Beers are made push innovation and offer a variety to drinkers to try a few and find one that suits their fancy.  If you aren’t trying multiple beers in one sitting, you aren’t fully experiencing Springdale.

This philosophy of experimentation and fun carries into its barrel room. The barrel room is a more spacious and classier version of Dave & Buster’s. You can spend your day, night, or day AND night having delicious beers while playing a retro video game, cornhole, bar shuffleboard and more with your friends.  If enjoying beer and games aren’t enough (who are you?!), the brewery overlooks the barrel room where you can watch the production process.

Springdale simply makes drinking beer fun.  Playing games and trying new things, what better way to spend a Saturday? Has anyone tried Springdale?  What do you think and what are some of your favorites? If not hurry on over…and don’t forget to pop by next door to Jack’s Abby for some stellar lagers and an amazing lunch while you’re at it. Not going to be in New England anytime soon? Well then let us know if there’s a place like Springdale in your town that the Crafty Cask team should try. We love finding new breweries that feel like an extension of our living room enticing us to hang out for hours and enjoy amazing craft beer!